A downloadable game for Windows

Due to popular demand, the game is now an exe rather than an installer.

You are the newest Daedalus employee, soon to be given the role of feeding a population of sirens. Good luck.

The game is a fps survival horror game, only one ending is currently avalible, however an update is coming soon [I ran out of time for the jam.]

This game was made in 1 week for the Australian Bushfire Charity Jam. It still has a few missing features and bugs, which are to be fixed soon in a coming update.

The Neon Infinite1 year ago(+1)

This is a really cool game, great atmosphere.

Reply
Neco The Sergal1 year ago(+1)

The file and installer, since of how its name differs and is installation based as it is, it reeks of red flags of potential viruses, best thing to do is make it so downloads and file names are consistent and not suspicious in any way. Like, downloading a game thats a 48mb 'installer' that's named: '0 Alpha Charity FPS 2 Setup' - color me paranoid but, there's always risk of people uploading viruses or trojan files so those who are most careful with downloading unscanned files from uploader-sites take precautions as to avoid risky downloads. This one being a case where, I'd want to play the game and give it a try, but I don't think its worth the risk, I'm only speaking on behalf of myself though. Unsure if others think and act the same way as I do when on sites like these downloading files/games that may or may not be real/fake/viruses.

Presentability always helps, don't make downloaders feel like the file is suspicious if its not suspicious. If you can avoid making it an installer, do so as well.

The "charity fps 2" name on the installer came from the original game name when I started the jam, I forgot to change that. Sorry about that. [I literally came up with the game name at the last minute.

As for the installer, I can release an exe, but there is no guarantee it will work. [I use 001 Game Creator, it can be weird]
Let me know if you want the base exe, and I'll release a exe version with the next update. [It might not work, but it's an option.]

hey when I buy I think it was called box of fish on one of the computer things I can't escape for some reason. So I'm sorta stuck XD

Like you can't move or the interface won't go away? Is the computer interface still visible?

Edit: Never mind, I found the bug. Thank you for reporting it, it will be fixed in the next update

I don't know. You could install it to a desktop folder, the game doesn't really need to install to programs. [That might not require admin access] I could also release the exe/non-installer version, but it only works on some computers and could crash. [The engine is weird.] 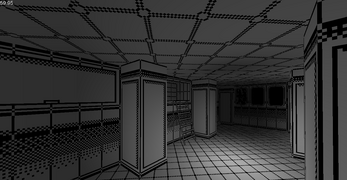