A downloadable game for Windows

"You need to restart the generator, but the mist it too heavy today.  Head though the maintenance tunnels, up through the apartments, and up to the roof. Be careful though, there is no telling who set up shop down there. Get it done and get back to the factory for lunch.

This is a short horror game, made to be played in  about 20-30 minutes.

WASD to move
E,Enter,Click to interact. You need to be close to objects to interact.
Esc to open menu.

Lots of objects can be interacted with.
Watch out for the lamb.
Good luck!

Not too bad at all, though there were definitely some issues. First off, the visual style and art looked neat - very reminiscent of games like Imscared and 7Days, but different enough in terms of content to feel unique. The Lamb looked neat too. I liked the premise of the game and her part in the story.

The not so great things;

I'm not going to beat around the bush here, the controls were infuriating. The character controlled clunkily and constantly became stuck to objects, walls, even the ceiling at one point whilst I was attempting to escape being imprisoned in something else, hah. The menus could really have done with some cleaning up as a lot of them overlapped and dialogues were too long for the dialogue boxes. When loading a game, the screen consistently filled with text about loading models/errors and such like. The story was quite undeveloped, which was a shame as what was there had me interested, it just felt like it could have done with a fair amount of fleshing out.

Overall pretty neat and I'd definitely be interested in seeing a sequel if you do decide to do one as the world you built does seem to have potential, albeit with some technical issues in its current state.

Thanks for the feedback. Hopefully I will have all the bugs worked out for my next game.

I downloaded the one named Into the Mist Updated 1.2.

Ok, thanks. I will be improving the engine for my next game.

The game should be free for the next 24 hours!

Update: The sale is over! Thanks to all who checked it out! [Although the sale thing is being buggy, so it might be on sale past 12:00 for a bit.]

There are three endings! One joke one and two real ones! 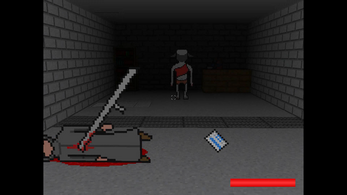